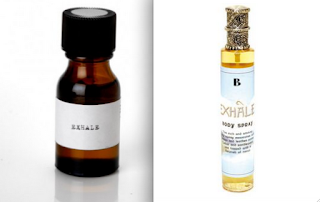 Exhale, accidentally layered with Inhale gave birth to what have become one of the most praised deliveries by the guys at Lush: Breath of God (originally released by the now extinct english firm B Never Too Busy To Be Beautiful).

While Inhale represents the bright fruity side, Exhale is entirely built on a woody/earthy vetiver accord enhanced in its smokiness by tarry notes and some leather. The overall effect will make the joy of any hardcore vetiver lover who likes its vetiver dark, smoky and slightly animalic. Excellent.

Recently reintroduced in the Lush range as an oil.

Everybody suggested Breath Of God as one of the weirdest fragrances around and as I'm always very curious about strange perfumes I immediatley decided to try it. A bizarre composition with mint, smoky incense/vetiver and fruits that's quite weird indeed. Linear and just a tad loud but definitely distinctive and (somehow) pleasant. It opens with incese juxtaposed to melon to then "evolve" into a smoky vetiver and a sort of woody-fruit-salad that's fresh and dark at the same time. Funny and very wearable, but far from being the masterpiece I expected.

I think I made a big mistake with Breath Of God as the first time I smelled it, I was at Lush surrounded by the loud and cacophonous chemical aroma that is typical of this kind of stores and, as the sense of smell is inarguably bounded and related to memory, my brain is no more able to dissociate the smell of BOG from the fake "natural-justmade-cosmethics&soaps" odor of Lush's points of sale. I decided to buy a 10ml vial anyway and maybe, one day, I'll be able to fully appreciate Breath Of God.

After several wearings I can say I'm addicted. The smoky vetiver juxtaposed to the general fresh vibe is extremely compelling and absolutely unique. Kudos. 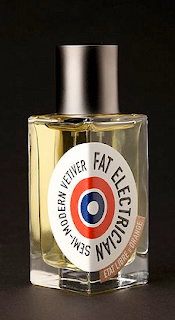 
This is what I call a different take on vetiver. A solid interpretation that is able to emerge in this crowded territory. A fine mixture of opoponax and vetiver laying on a slightly sweet vanilla base and enriched by hints of incense and resinous elements throughout. Easy to wear yet distinctive, simple yet perfectly refined. A nice everyday's fragrance and one of the best releases in the Eldo's range. A valid option if you're looking for a modern masculine but you want to avoid the usual clean-laundered synthetic-citrus loaded with woody maber. 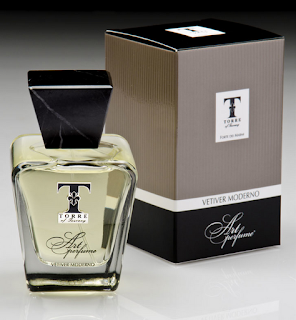 Vetiver Moderno has the typical transparent aspect of many modern niche fragrances. The usual green-citrusy opening it's paired with a smooth yet quite complex floral pattern that's pretty well executed but probably not so original. During this phase nutmeg provides an overall spicy-pungent aspect while the florals work as a sort of kaleydoscopic machine continuely changing from soft white flowers to hints of rose and iris. I can't actually put my finger on what other fragrance Vetiver Moderno reminds me of but, the feeling of deja-vu is quite strong.

The drydown is clean, musky and woody and it's where a restrained vetiver note plays its main part. Not bad if you like the genre but very far from being outstanding or worthy of being classified as a vetiver-centered composition. Check it out if you're looking for a spring/summer fragrance in the typical transparent style of modern niche perfumery. 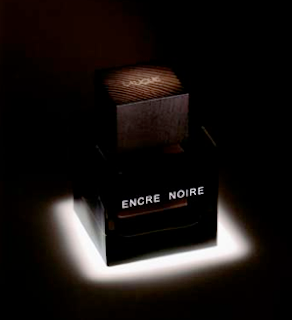 A great, clean vetiver with a dark twist. I find Encre Noire to have 3 quite distinct phases while keepeng the same characteristics throughout. The opening is potent, earthy, dark and a bit pungent, then it settles down to a mid phase where vetiver plays its main role with a transparent and clean intepretation. It's bold and somehow polite, clean but not affected and it still mantain the "dark nuance" that makes it so fascinating. In the final phase, the vetiver is enhanced in its licorice aspect and, together with musk and woody notes, give birth to a delighful drydown (assuming you don't mind a consistent dose of Iso E Super). A discreet scent, quite close to the skin but absolutely beautiful in all its parts, bottle included. Not as good as Sycomore but if you're on a limited budget this is a winner. 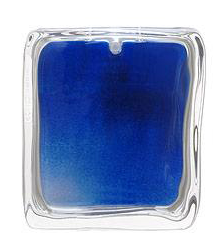 It happened by accident that I layered two fragrances. I was testing Encre Noir to write my final review and instead of spraying it on an unscented smelling strip, I sprayed it on a piece of paper on which I previously tested Etro's Anice.
What a suprise to smell the anisic aspect of vetiver amphasized by the real anise note. Especially in the drydown when the two perfumes blended perfectly together.

Well, I found Kenzo Air Intense / Kenzo Air to have a very similar vibe to the above scenario and despites probably not being as praised as Encre Noir, it still has a great charme. Peppery, anisic, funny. Chemical? Yes, most definitely, but very well blended. Does great in warm weather.

If you're wondering about the differencies between the "intense" version and the original, well, I haven't found a substantial one. The "intense" is exactly like the original version but a little bit stronger, that's it. 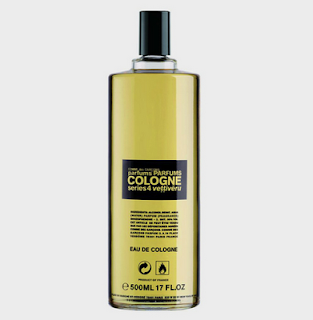 I can easily say that Vettiveru is a valid candidate to be considered one of the best bang for the buck when it comes to vetivers. An incredibly nice composition that improves the eau de cologne formula with a slightly "dirty" vetiver note. The overall effect is quite intriguing with the clean aspect given by the neroli/bergamot/florals combo juxtaposed to a dominant vetiver note that add a earthy/salty vibe that's at the same time refreshing and invigorating. Great lasting power, nice projection, very reasonably priced. One of the best "fresh" vetivers around. Recommended!